DEAL WITH THE DEAL 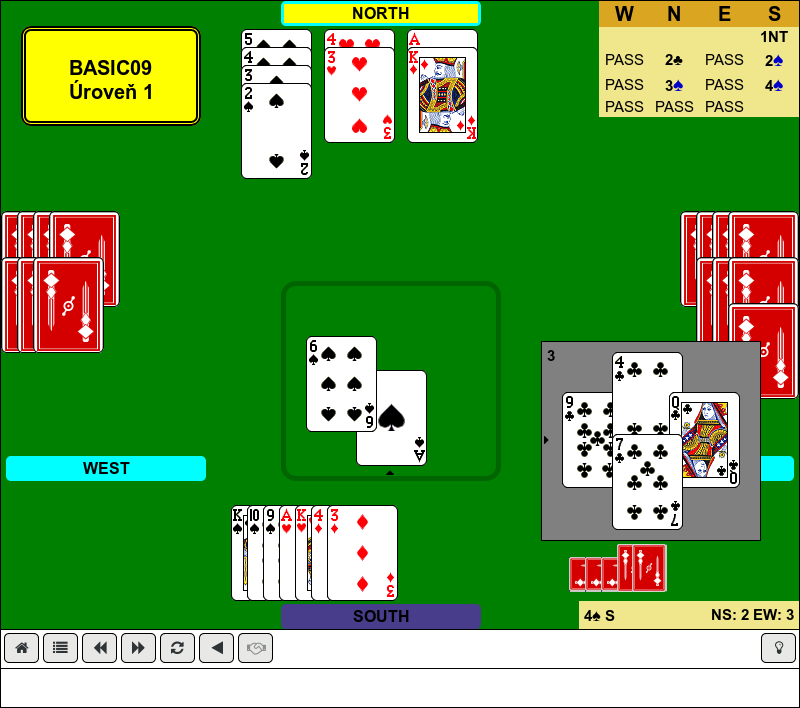 Players are labeled by cardinal points names, your are always South. In declarer play problems you are the declarer, in defense problems declarer is West or East. Player on play is marked by yellow color.

In the upper left corner of the table a name of the deal and a difficulty level is displayed. In the upper right corner is a bidding if the deal has one. In the lower right corner is displayed a contract and current tricks score. For double dummy problems with less then 13 cards trump (T) and number of wanted tricks (W) is shown instead of contract.

Click anywhere on the table to start a game. After each trick game is paused and by click you move played cards out of the table and the game continues. You can display played tricks by moving mouse cursor onto played trick stack in the lower right corner of the table. Game ends in the moment when one partnership has enough tricks to made or set the contract.

During play the 'Claim' button can be activated. You can press it and finish the deal immediately. If a winning line against the best play of opponents exists for you in that moment, positive result is written down.

Deal analysis can be started by bulb button (), moved forward by clicking anywhere on the table or the analysis pane and back by Back button (). Table view is optimezed for your current display size. Minimal supported display size is 320x450 pixels (with x height). On small displays closed hands are not shown at all. Some information (bidding, additional deal info, prevous tricks) are hidden too and can be shown using buttons described in next section.

On touch screens there are two ways how to play a card. Simple tapping is the first one. The second one is moving finger from the card to the center of the table. Card is raised at the start of move but does not follow your finger. If you see you selected wrong card you can cancel the action by changing gesture direction back to hand, to the edge of the display.

Both partneships use American standard if not stated otherwise. In declarer play problems bidding of declarer's pair is rather illustrative.

Leads: standard, ace from AK + anything

For registered players, we keep 3 types of results with every deal.

Successful result is written if the deal is succesfully finished first time it is played, in 10 minutes, without reload, using Back button or reading deal analysis. Otherwise negative result is written after the first deal play.

Keeps result of last play of the deal. It is changed every time the deal is played.